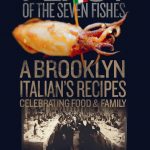 310 Comments on “Episode 73 – Feast of the Seven Fishes, A Brooklyn Story and Italian Recipes with Daniel Paterna”