Interview with Joe Farina, the Director of Communications and Marketing for the Dick Biondi Film. 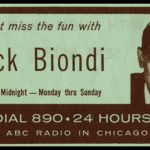