Interview with Tom Dreesen, author of “STILL STANDING… My Journey From Streets And Saloons To The Stage, And Sinatra”. 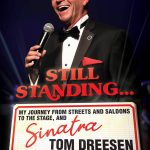 784 Comments on “Episode 71 – Sinatra, Streets and Saloons to the Stage with Legendary Entertainer Tom Dreesen”